Our Greenbelt Hike Story - Walking Together 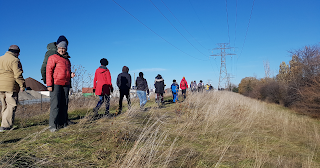 Four different hike levels were offered so everyone could participate.  There was a 2 km Family Hike, a 4 km Beginner Hike, a 7 km Intermediate Hike and an epic 19.1 km Advanced Hike. All hikes started at Warden Hilltop Community Centre beside the Warden Subway Station North Parking Lot.

The first three hike levels were solely on the 6.4 km long proposed West Scarborough Rail Trail while the Advanced hike continued on along the Meadowy all the way to Rough National Urban Park and the Greenbelt.

12 hardy souls embarked on this epic adventure along a walkable green corridor that still connects Warden Subway Station to the Greenbelt; 7 arrived in the dark at Rouge National Urban Park at Meadowvale and Sheppard, 5 hours later.  There are no hike logs or other records documenting anyone else attempting this feat though the trail is used in sections by hikers, cyclists, and dog walkers.  As far as we know, this is the first such attempt! 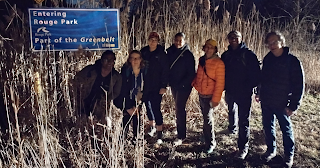 A proper trail for pedestrians and cyclists would reduce this time for hikers considerably and cyclists could make it in 2 hours or less.  Imagine cycling to Rouge National Urban Park from Scarborough or Downtown in a few hours through fields and forests, beside rivers and creeks and naturalized areas.  Our neighbourhoods need to include greenspaces, parks, and trails like the West Scarborough Rail Trail and the Meadoway where we can recreate, meditate and connect. Our city and province need the Greenbelt, preserved in its entirety for a healthy ecosystem, environment, and life.

Hike leader Laura Magee Strachan of Let’s Hike TO, has lived with her family in the Clairlea neighbourhood of Scarborough Southwest for 15 years.  She is a freelance designer who spends her free time volunteering for environmental initiatives and as a hike leader and social media coordinator for Let's Hike TO.  Laura was impressed with the troopers that stuck it out to the end. She was struck by the diversity of the group in culture and age and the wealth of knowledge the hikers shared as they passed through sections of the trail they lived near and were familiar with.

Hiker Paran Nithiyananthan tagged along with his friend Christine on a free Saturday and was glad he did. Paran did not even know Scarborough had a greenway never mind that it connected to the Greenbelt.  He enjoyed the camaraderie of the group and the sharing of information and experiences. Highlights for Paran were rescuing a few bugs from being stomped on, seeing Saturn at the end of the day, and finding someone else who had heard of the 60 lb French goldfish.  Paran found the unplanned hike a fitting end to a 6-month spiritual journey he had embarked on.

Steve Glassman particularly enjoyed hiking on Military Trail north of Ellesmere which was under construction and closed to traffic.  The valley was peaceful and serene as they crossed the newly renovated bridge over Highland Creek and Steve was hoping to see some wildlife.  The Greenway is inhabited by many animal species but the group did not see much more than the more expected squirrels and birds although, in the construction zone, Steve claimed to have seen a John “Deere” tractor and “Bobcat” loader. 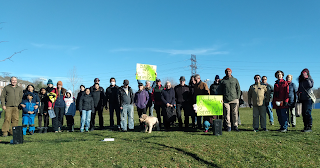 All participants attending expressed care for local greenspaces, connecting neighbourhoods, and preserving the Greenbelt.  They showed up to support the Greenbelt, oppose Bill 23, which threatens the Greenbelt, and the establishment of the West Scarborough Rail Trail.

The hikers at this event made connections with themselves, their community, nature, and the universe as they hiked in support of the Greenbelt.